The coronavirus pandemic remained front and center during the third quarter of 2020. With over 30 million coronavirus cases and 1 million deaths reported, global governments are still trying to grapple with the pandemic nearly 9 months since the first reported case in Wuhan, China. With greater emphasis on doing whatever it takes to starve off a deep recession, global governments are supporting its economies through increased spending, with some countries observing their largest fiscal deficits in years.

In the United States, the coronavirus pandemic has induced a social and economic divide, revealing the uneven socio-economic impact of the current pandemic on American societies. During the third quarter, federal unemployment benefits of $600 per week which was passed by Congress as a part of the CARES Act expired, leaving a large swath of the American population with greater uncertainty. As of today, lawmakers have been unable to come to an agreement to extend the benefits. However, progress is being made with the Democratic House recently passing a $2.2 Trillion stimulus bill that would make its way to the Senate for additional negotiations. As workers are feeling the pinch from the pandemic, total personal income took a $667 Billion (annualized) hit, falling 2.7% in August from the previous month. Additionally, US household real disposable income fell to $17.30 Trillion, a decline of 3.20% from the previous month. The fall in income was mainly due to a 14.8% decline in government transfers to households, which primarily resulted from the expiration of the federal unemployment insurance program.

Despite the decline in household income, income levels today remain higher than pre-pandemic levels, resulting from higher personal savings rate supported by the boost from fiscal stimulus. Savings rate spiked to an all-time high at 33% during the height of the crisis and has since retreated to a tune of 14%. Nonetheless, a 14% personal savings rate is still significantly above the long-term historical average of 8%.

Real consumer spending however increased 1% in August- driven by a 1.10% increase in services spending, flat in durable goods spending, and a 0.2% fall in non-durable goods spending. The increase in services spending is encouraging, highlighting that consumers are returning to restaurants and other consumer-facing businesses as parts of the economy continues to re-open. However, the overall increase in consumer spending was the weakest increase since the height of the pandemic, pointing to a potential slowdown in the recovery as virus cases begin to rise again and uncertainties ranging from lack of additional fiscal stimulus and presidential election volatility dominate the general environment.

With a higher personal savings rate and slowdown in consumer spending, consumer sentiment looks to be more conservative as many households are reluctant to spend due to the ongoing uncertainties today. This could drag consumption activity in the short-term but could act as a potential tailwind once the virus is under control and the economy operates back at its full capacity.

As for the stock market, the S&P 500 hit an all-time high during the third quarter, surpassing its previous high notched back in February. Should the current rally hold up, it would mark the fastest recovery in market history from trough to previous market high, taking a mere 5 months to do so. Investor optimism seems to be fueled by better than expected corporate earnings in the second quarter, economy re-opening plans, and a swift recovery in housing and manufacturing activity.

Despite the positive economic developments in the third quarter, the market recovery has been anything but broad-based. The dispersion between the best (technology) and worst (energy) sectors for the year stood at 75.95% at the end of the third quarter. This marks one of the largest dispersions since the Great Financial Crisis, when sector return distributions between the best and worst performing sectors stood at 84.21% in 2009.

Digging a little deeper, the Big 5 Tech stocks which include Apple, Microsoft, Amazon, Facebook, and Alphabet have driven most of the upside in the S&P 500 this year due to their market cap weighting properties in the index. Those five stocks make up close to 25% of the index and on average have returned 35% this year as of September 30, 2020. With the S&P 500 being up 5.57% at the end of the third quarter, these Big Tech stocks make up more than 100% of the captured upside in the S&P 500. Fundamentally, such performance can be justified as Big Tech have seen strong revenue growth throughout the pandemic crisis, showing how undeterred these companies were from the pandemic, further enhancing the resiliency of their business models at a time when the global economy is becoming much more digital.

Additionally, 289 of the 505 stocks in the S&P 500 are still negative year to date, meaning 57% of companies in the market remain in negative territory year to date, further exaggerating the impact of Big Tech stocks and its effect on the perceived bifurcation of the economy and stock market.

Although market valuation multiples are higher across the board, current equity risk premiums remain above its historical average, making equities relatively more attractive than other asset classes despite its higher valuation. The main driver of higher equity risk premiums has been the result of the precipitous decline in Treasury yields this year. The yield comparison of different asset classes below highlights the relative attractiveness of equities as an asset class.

Equities as a result still provide a strong argument for inclusion in investors’ portfolios. The ability for equities to provide attractive growth potential, higher dividend yields than its fixed income counterparts, and positive risk premiums adequately compensates investors for that additional risk in a low-interest rate environment.

As a result of the strong market recovery, third quarter Initial Public Offerings (IPOs) activity increased sharply to levels not seen since the Great Financial Crisis. According to FactSet data, there were a total of 165 companies that IPO’d on U.S Exchanges during the third quarter with gross proceeds totaling approximately $61 billion. On a monthly basis, 55 companies IPO’d in July, 51 companies in August, and 59 in September. Putting it in a historical perspective, this is a remarkable increase as the number of monthly IPOs never exceeded 40 per month over the last decade.

When looking at IPO volume by sector, the Financial sector led the charge, making up 86 of the 165 of IPOs launched in the third quarter for a total of $33billion in gross proceeds raised. This is largely attributed to the 77 Special Purpose Acquisition Companies (SPACs) that IPO’d who collectively raised approximately $30billion in gross proceeds in the third quarter. SPACs are publicly traded companies that raise capital in the public market for the sole purpose of acquiring or merging with an existing company. Although SPACs have existed for a while, they started going mainstream this year after several high-profile and successful reverse mergers, bringing companies like Nikola Motor Co, DraftKings, and Virgin Galactic into public markets without the usual diligence or effort required with a traditional IPO process. This has led to a wider adoption and preference of private companies to go public through SPACs. 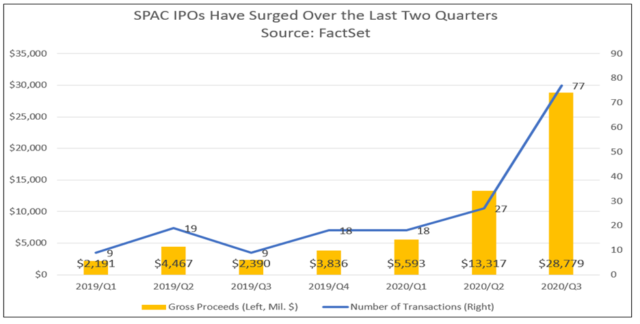 Although SPACs continue to receive mainstream attention and public investors’ funding, investors ought to be diligent in this space due to the common pre-revenue nature of many firms being acquired or merged with public SPACs. Firms being valued at billions of dollars despite not having a single revenue-producing product on the market resembles an environment similar to developments during the dot-com bubble. Additionally, private companies looking tap public markets for funding could be an indication of private investor fatigue, warranting further caution on company valuations. Nonetheless, public markets remain an attractive and necessary source of funding for high growth companies with a vision to continue to expand their businesses.

Looking ahead into the fourth quarter of 2020, we expect volatility to continue to pick up, as election risks heats up while economic progress begins to plateau. The lack of additional stimulus and government support may continue to heighten such volatility. However, market reaction to such news may be insipid given that part of the news flow may already be priced in. Nonetheless, the current market environment with large intra-sector dispersion creates a supportive environment for investors to add additional alpha in their portfolios with a narrow, more concentrated set of portfolio holdings. Despite the fastest market recovery in history, opportunities remain abundant in the marketplace given how concentrated positive market returns have been on a handful of stocks in this recovery. The sustainability of the market recovery still rests on the other parts of the economy to pull its weight, creating a broader, more sustainable recovery. Challenges to such broad-based recovery remain plentiful however, with virus cases rising again as we enter the winter season and consumers continue to remain very conservative. Nonetheless, we are optimistic on the progress made on the medical front and remain focused on secular tailwinds around decentralization, decarbonation, and digitization of our global economy moving forward.

PDF Version On March 4th I sat down at a kitchen table with two new clients in Elkhorn, WI. The husband recently retired after 41

PDF Version Thank you for your continued trust and confidence. We would like to inform you a recent trade that we made in the Liberty