Referencing our last quarter’s commentary, we mentioned that 2021 remains to be a “show me” reflation trade story given the dislocations between markets and the state of the US economy. The first quarter is officially in the books and the US economy appear to be on the right track of the reflation trade. With greater deployment of COVID-19 vaccines, increasing consumer discretionary spending, and announcements of additional fiscal support, the US economy is projected to have one of its best economic years in over 37 years. During the quarter, the Organization for Economic Cooperation and Development (OECD) more than doubled its Gross Domestic Product (GDP) forecast for the US economy to 6.5%. If this prediction were to hold true, it would mark only the second time since 1966 that the US GDP growth exceeded 6%, following only behind 1984 when GDP growth was 7.2%. 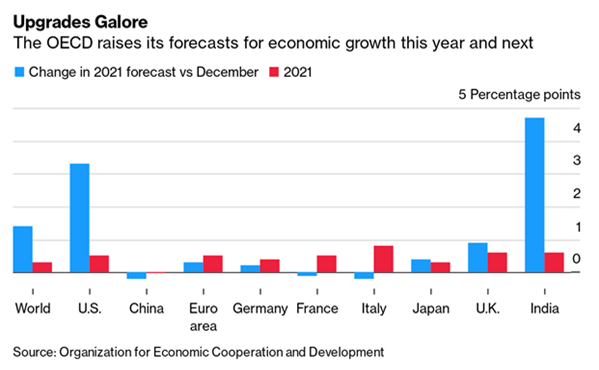 Improved economic growth expectations also led to disruptive financial market activity that helped close some of the dislocations between markets and the economy. Strong and positive sentiment resulted in a swift rise in inflation expectations, higher Treasury yields, and rotation into re-opening/cyclical companies that stand to benefit the most from a more robust economy. This also led to a re-pricing in high growth and high valuation type of stocks which we view as a healthy mechanism of a well-functioning market. The catalyst of the rotation can be partly explained by wider vaccine distributions and the additional stimulus injected into the economy from the $1.9 trillion American Rescue Plan Act, further strengthening consumers’ balance sheet, alleviating hardships of the unemployed, and improving the prospects of a stronger recovery. At the same time, the Federal Reserve kept its promise of maintaining its loose and accommodative monetary policy until the labor market improves, allowing greater access to credit which can help aid in the recovery of the economy.

The term reflation refers to a period where the economy is growing back up to its longer-term trend, following a dip in the business cycle. We saw a massive dip in the economy from its long-term trend in 2020 due to the COVID-19 pandemic. Such dip resulted in a deflationary environment where real US GDP growth was -3.4%. To prevent this prolonged and vicious cycle of deflation, the Federal Reserve and government injected substantial amount of stimulus into both financial markets and the economy to revive a sense of stability. Policy makers’ swift actions had two major consequences. First, it provided a backstop to the economy from falling off a cliff, and secondly, it increased the odds of a stronger reflationary period.

The difference between reflation and inflation is an important distinction to make. Reflation is a period where growth and inflation trends usually run above the long-term average as the economy recovers from the trough of a business cycle. Conversely, inflation is simply a rise in aggregate price levels that tend to be a byproduct of reflation but need not be synonymous with reflation. Like most business cycles, the reflationary trade must eventually lead to a more sustainable expansion in the economy where growth and inflation levels revert to its long-run average.

Financial markets today appear to be pricing an expectation of a strong reflationary period driven by record high household savings rate, supported by substantial fiscal and monetary policies. Additionally, cash on corporate balance sheets are also at record highs with many corporations taking advantage of the recent drop in interest rates to shore up their balance sheets. The potential increase in spending and investment from these two forces are driving some of the most exciting headline economic growth forecasts that we see today.

Although we feel confident that consumers and businesses could generate some pent-up demand from all this dry powder over the short term, the biggest challenge would be incentivizing consumers and businesses to sustainably spend and invest most of this cash to translate them into economic growth over the long term. One component that can drive stronger long-term economic growth is investments, particularly investment trends as a percentage of GDP.

Investments are an important factor for future economic growth because it can positively impact the level of production of goods and services in an economy. When we look at investment trends over the last 70 years, net investments as a percentage of GDP have fallen sharply since the recession in 2008 and struggled to recover back above pre-financial crisis levels. Businesses have been reluctant to invest in the post-financial crisis era despite the economy being at full employment and real GDP rising above pre-crisis levels. Additionally, if we account for the depreciation of capital stock in the net investment figure, net investment is even lower than what is depicted in the chart above. We believe part of the solution to this is to increase the potential rate of return for businesses which incentivizes them to invest. Increased global demand, stronger public-private investment partnerships, and a well-functioning capital market could lead to stronger business investments and build the capital stock needed for the American economy to compete in the 21st Century. On the bright side, our economy perhaps requires less investment for additional economic growth as our economy have become less capital-intensive over the last decade. The acceleration in digital innovation and rise in intellectual property value may allow the economy to grow at a more sustainable rate without heavy capital investments.

Moving on to the consumer’s perspective, the challenge on incentivizing stronger consumer spending levels rests on behavioral factors relating to consumers’ perception of debt.

Credit or debt is an important function that fuels economic growth because it increases the spending power of consumers. Credit has the potential to accelerate economic growth because one person’s increase in spending power (with the use of credit) equates to another person’s increase in income. Taking this concept on an aggregate level, economic production rises as a result. This can lead to rising aggregate income levels and eventually the ability for consumers to pay back the debt taken out in the first place and the cycle repeats. Referencing the household debt to GDP levels in the chart above, we observe that consumer credit was on an upcycle until the Great Financial Crisis in 2008. The financial damage of the housing bubble was no doubt severe, but the behavioral damage to consumers had an even greater long-term impact. Consumers were scarred by the Great Financial Crisis and began a period of deleveraging. Debt became intolerable and households began to deleverage which could possibly help explain why growth over the last decade was so mild despite solid fundamentals. As a result, inflation remained benign and the Federal Reserve maintained the course of loose monetary policies to encourage higher credit adoption to reinvigorate growth- a consequence that led to higher monetary inflation in the form of higher asset prices but not higher growth in the economy due to household debt aversion. 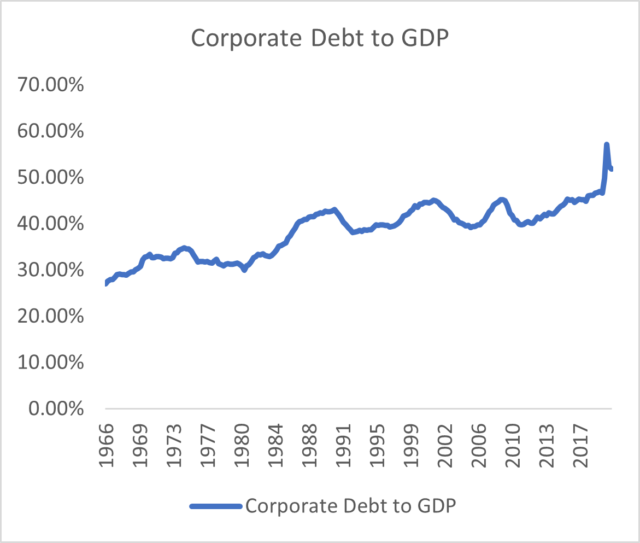 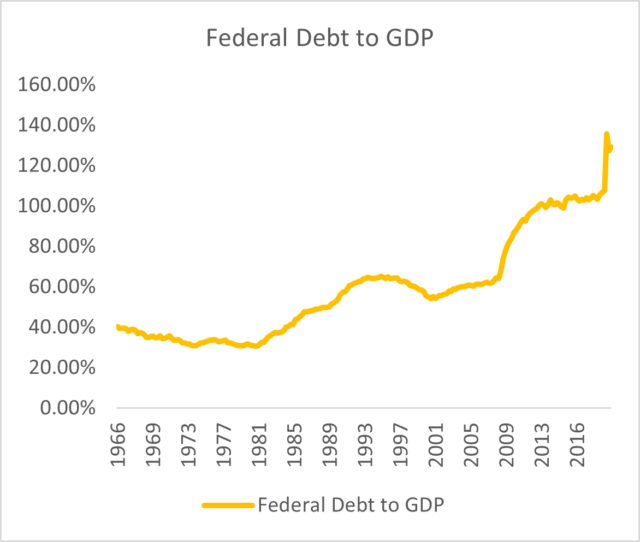 Source: Board of Governors of the Federal Reserve System (US) and Liberty One Investment Management

Conversely, corporations and the government were the main beneficiaries of a lower interest rate environment. One would assume that maybe they might use such low-cost of capital for additional productivity growth to drive the economy. However, given the relatively low level of investments as previously discussed, evidence that the use of this low-cost debt being put to productive use are not definitive. So where did the money go and how were they used? One potential explanation is corporations using low-cost debt to buy back shares. According to Standard and Poor’s, the percentage of companies in the S&P 1500 that conducted stock buybacks increased from 32% in 2008 to about 55% by 2018, and the aggregate number of buybacks also increased from $320 billion to slightly under $1 trillion during the same period. 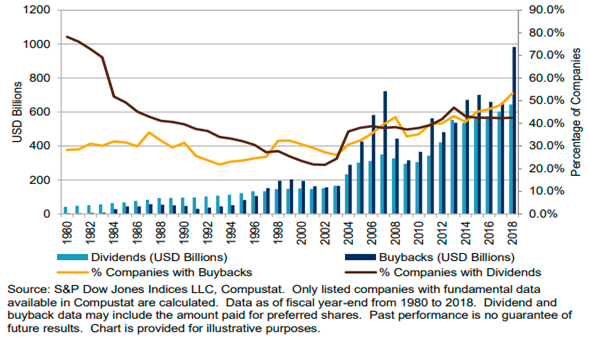 Although stock buybacks are welcomed by shareholders and management, they do very little in terms of generating additional production growth. The moral hazard and different viewpoints in corporations using cheap source of funding to advance management interests are highly discussed outside of the scope of this commentary but continues to be a phenomenon in restricting future economic growth. Additionally, there have also been arguments that low interest rates have failed to translate into productivity growth, and instead been used to help keep “zombie companies” alive. Zombie companies are businesses that barely earn enough money to dig themselves out of their debt obligations. As a result, capital is flowing into unproductive firms, depressing employment, and have profound consequences to the economic recovery. At the end of 2020, there is approximately $2 trillion in debt obligations held by zombie companies, a potential risk to the US bond market that is twice the size of the US equity market.

As economic indicators continue to point towards a strong reflationary environment, businesses and their earnings are also expected to continue to perform well, especially in economic sensitive sectors. Fiscal and monetary policies remain extremely supportive that could continue to fuel the rally. However, as investors, we believe a significant amount of these expectations are already being priced into the valuations of many cyclical stocks. The biggest risk to the reflation trade is if economic growth undershoots the market’s already high expectations. Global recovery remains uneven, with inoculation programs and virus control diverging between the richer and poorer nations. If poorer nations begin to lag and US growth outlook continues to push up market-based interest rates on US government debt, borrowing becomes more expensive and capital outflows from poorer nations with already weak economies may create some troubles. On the flip side, a strong US economy may be very beneficial for countries that export products to the US, with the US becoming the beacon for global growth.

Fundamentally, we recommend investors to exert additional caution with the rotation into value names and avoid potential value traps. While many companies benefit from a business upcycle, we find that many others will continue to face pre-pandemic challenges in market share loses due to shifting consumer preferences and innovation. We prefer being selective in individual names within these sectors that have the resources, ability, and flexibility to thrive and avoid some of the displacement risks. Within Liberty One models that hold positions in cyclical sectors, we continue to focus on companies that are positioned to either disrupt or adapt in a disruptive world. We also like companies that are run by solid management teams that have a proven track record of strong execution.

Additionally, what happens beyond the reflationary period can also have significant impact to market valuations, especially if pre-pandemic growth challenges persist. Overcoming challenges to incentivize higher private and public investments and spending is an important function that could lead to stronger economic growth. The recent $2 trillion infrastructure bill announced by the Biden Administration is a step in the right direction. The challenge on how to finance such a large bill remain the biggest hurdle. Moreover, the acceleration of our economic transformation could yield positive results over the longer-term, with greater focus on improving both physical and digital infrastructures in the country. An upgraded capital stock and a more talented labor force are keys for the US economy to remain competitive in the 21st Century.

PDF Version Thank you for your continued trust and confidence. We would like to inform you that we made several changes to the Tactical

After a promising start to the quarter in July, persistently high inflation, global growth concerns, and energy price shocks urged the Federal Reserve to aggressively