Most asset classes were under pressure in the second quarter as investors moved to price in further interest rate hikes and a potential economic recession. Inflation remained robust globally throughout the period and financial conditions continued to tighten. The US Central Bank had a busy quarter as well, increasing short-term rates by 1.25% within 41 days. In this commentary, we will explore the Fed’s recent actions, addressing topics of recessions, employment, and our outlook as we move into the second half of 2022.

Since the first-rate hike in nearly 3 years in March 2022, the Fed raised the target benchmark for interest rates by 1.25% in two consecutive meetings thereafter. While the 50-bps rate hike in May was widely anticipated, the 75-bps move in June took many by surprise. There are two reasons for that, both of which are interconnected: prior comment by Jerome Powell and lack of forward guidance. The former refers to the response given by Jerome Powell during the FOMC press conference in May when the reporter asked if 75 bps or 100 bps rate hike is on the table to which Jerome Powell replied that it is not something that the committee is actively considering and if their expectations were to change, it would be communicated to the public. So, why was there no communication or forward guidance on the Fed’s end when expectations did change? The answer is somewhat technical. Prior, during and after the FOMC meeting, within a specific time period, the FOMC participants are not allowed to make public statements, which refers to as the blackout period. It was during the blackout period when two important pieces of data were released, causing the Fed to go 75 bps in June and making a significant upward revision to the projected path of interest rates by the end of the year.

The FOMC committee increased median estimate of the federal funds rate by the end of 2022 from 1.9% to 3.4%, with the latter estimate having a range from 3.1% to 3.9%. This would imply that in 2022, the federal funds rate would increase by at least 3% within a single year for the first time since 1981. Furthermore, historically, going back as far as 1954, the federal funds rate increased by more than 3% within a single year on 7 separate occasions, all 7 of which happened during the Great Inflation period from 1965 to 1982 (Note: technically 8 times, but two occasions happened within a single year), and each time recession either followed or was already underway. Could it be the case this time around? No one knows for sure, but what history shows is that the Fed has a poor track record when it comes to soft landing. And with a 75-bps rate move and potentially over 3% federal funds rate by the end of the year, the probability of recession has increased. However, it is important to keep in mind that the Fed has made it very clear that it will be data dependent and will adjust policy if needed, which means the 3% federal funds rate by the end of the year is not a certain scenario.

The graph below depicts the case against the soft landing. Except for 1994, almost every tightening cycle resulted in a higher unemployment rate and a recession. Why so? In the short run, the Fed is faced with a tradeoff between stable prices (low inflation) and full employment.  If the Fed wants stable prices, it will raise interest rates at the expense of higher unemployment, and if the Fed wants full employment, it will keep rates low at the expense of higher inflation. Now, in the real world, the relationship is not as black and white, but during periods when the economy is stressed with shocks, the relationship becomes evident. For example, although supply chain issues were caused by factors outside of the Fed’s control, such as Covid-19, The Fed, by wanting the economy to return to pre-covid and also inclusive employment level, kept interest rates low, allowing aggregate demand to further put pressure on stressed supply chains; thus, exacerbating disbalance between supply and demand. The calculation was that the supply chain issues will resolve itself so there would be no need to try and reduce consumption, but as that didn’t materialize, the Fed faced an economy with low unemployment rate and rising inflation, coupled with soaring energy and commodity prices due to a geopolitical crisis. As a result, the Fed pivoted by focusing now on restoring low inflation, most likely at the expense of a higher unemployment. 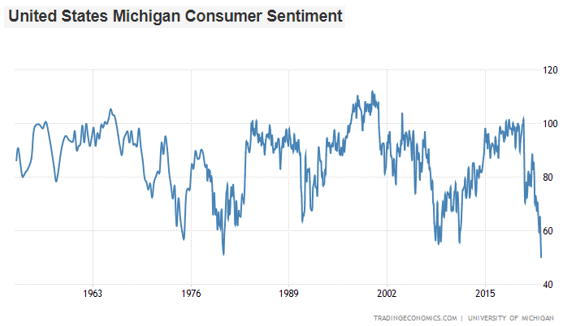 On the positive note, the personal savings rate for April was significantly revised upward from 4.4%, the lowest level since September 2008, to 5.2%. In May, the savings rate was slightly higher, 5.4%, which means that consumers are curtailing spending in response to tighter financial conditions and rising inflation. While this might be bad for near term economic growth, lower spending under current conditions is good for two reasons: 1) the Fed achieves its goal faster and 2) more spending capacity once the storm is over. The Fed made it clear that it wants aggregate spending to come down for supply to catch up. Therefore, the sooner this happens, the less need there would be for the Fed to tighten aggressively, severely impacting inflation expectations and asset prices. On the other hand, savings will help the economy in the recovery when spending will be encouraged. Therefore, voluntarily putting money away is more favorable at the moment even if that means lower economic growth in the near term. It is important to remember that the aggregate consumers’ balance sheet remain strong, which explains why the overall economy is still relatively resilient, even after four months of high energy and food prices.

The US economy may enter a technical recession as early indications in one of the public GDP trackers constructed by the Atlanta Fed, is showing negative real GDP growth rate for Q2. In fact, the forecast was -1% on June 30th which further declined to -2.1% on July 1st, after the PMI report. According to the textbook definition, recession is a negative GDP growth rate for two consecutive quarters. However, it is unlikely that the entity responsible for declaring recessions, NBER Business Cycle Dating Committee, would announce one because the definition/criteria they use is significantly different from what the textbook implies. Their definition/criteria is a persistent or severe decline in broad-based economic activity. In our opinion, the broad-based criteria is unlikely to be satisfied because an important part of the economy- the labor market is still somewhat healthy, although strength is moderating.

The labor market in April and May added 436K and 390K jobs, respectively. While the growth rate is decelerating, nominal numbers are still well above the historical average of approximately 200K jobs per month. However, a slowdown in the labor market growth would be a welcoming development since that is the tradeoff the Fed is targeting, and the sooner it happens, the less likely the Fed would have to tighten more aggressively.

One of the more surprising phenomena in financial markets this year is that the S&P 500 experienced a technical definition of a bear market (losing -20% or more), but trading volumes and volatility measures have been relatively subdued. Historically, bear markets have been accompanied by high trading volumes and the CBOE Volatility Index (VIX), or the “fear index” breaching the 40-level mark. However, none of that has happened so far in 2022. The lack of anxiety suggests that investors aren’t quite bailing out on stocks just yet, indicating that either investors are confident in some kind of market recovery, or that market lows have not been reached due to the lack of investor capitulation. The end of corrections/ bear markets are usually accompanied by extreme volatility and trading volume.

The Fed is tightening financial conditions at a speed not seen since the early 80’s. As a result, the probability of a recession is rising. Certain leading indicators are pointing to slower economic growth ahead, while consumer data is already showing reduced spending and higher savings rate. Considering some of that slowdown, second quarter real GDP is close to registering a negative growth rate and recession risk is elevated, but a deep and prolonged recession should not necessarily be the base case. Worries about a brutal recession may also be assuaged by latest credit and debit card data which shows that consumer spending has remained resilient despite inflation. Any data point that suggests that either inflation is coming down faster so that the Fed can take their foot off the brake quicker, or that recession looks less likely through coincident indicators could give the market some relief.

PDF Version Thank you for your continued trust and confidence. We would like to inform you some trade changes in the CAPSTONE portfolio. We replaced

PDF Version Thank you for your continued trust and confidence. We would like to inform you that we placed some trades in the Tactical Income